Though its leadership in fitness bands is assured, Argus Insights foresees weakness in Fitbit’s performance in smartwatches, a growing wearables segment

Los Gatos, CA, May 21, 2015 –  With Fitbit’s recent S1 SEC filing and the pending IPO, scrutiny of the data regarding the company’s market strength has become intense. Since Fitbit introduced its first fitness band and activity tracker in 2011, the company has dominated the category, but data released today from Argus Insights reveals some areas of new vulnerability. In the global wearables category, Argus Insights foresees Fitbit market share slipping as smartwatches, which also track fitness and activity, continue to gain ground. The Argus Insights report is derived from an analysis of wearables research based on information from more than 100,000 global consumers.

“While Fitbit is clearly the overall leader compared to the other fitness bands such as Jawbone, Garmin and Misfit, a lead that is continuing to grow even over the last month, in the overall wearables category where smartwatches come into play, fitness bands in general are dropping as a share of the market,” said John Feland, CEO and founder, Argus Insights.

Fitbit is losing out as a part of this comprehensive wearables category with a mindshare ranking of far less than 68-percent market share disclosed in the S-1. Says Feland, “Fitbit will need to differentiate itself more as almost any smartwatch and other wearable product out there will tell you how many steps you took and lets you share that information with your friends.”

“People get tired of the fitness bands and throw them in the sock drawer,” says Feland. “They stop being useful, people lose their fitness momentum – all similar reasons as to why people quit going to the gym. For Fitbit to continuously grow, they will need to keep users engaged and give them reasons to buy new versions of the products. Right now our data indicate that other more comprehensive devices are taking over for fitness trackers.”

Argus Insights also expects the number of white label fitness bands to increase in six months –just as white label tablets proliferated. “If you will be putting that fitness band in the sock drawer in a couple of months, as many people do, it won’t matter that the generic fitness band is not as cool as a Fitbit. It will definitely be cheaper and work almost exactly the same way.”

To sum up, says Feland, “We think Q2 is looking weak for Fitbit compared to the other brands, globally. They are especially impacted by slack demand for their smartwatch which was introduced in December. We recommend a wait and see attitude when it comes to Fitbit and their future.”

Argus Insights has identified several areas of market concern as Fitbit heads to its IPO: 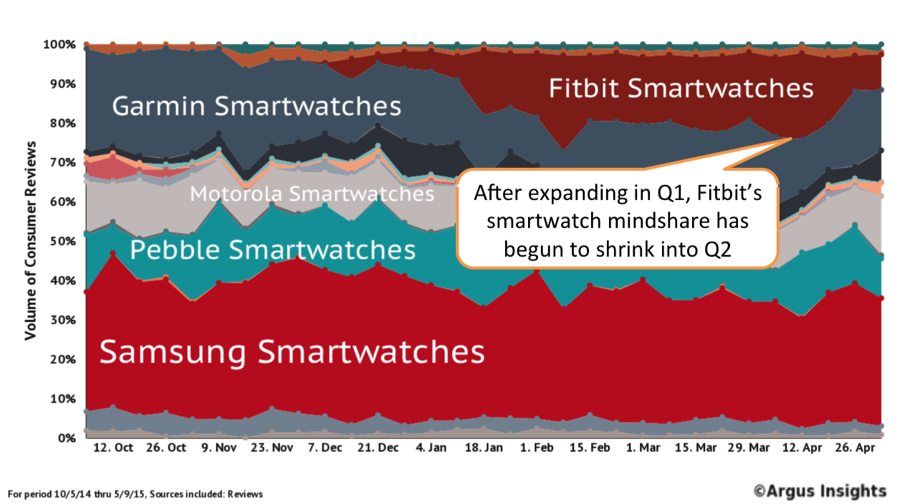 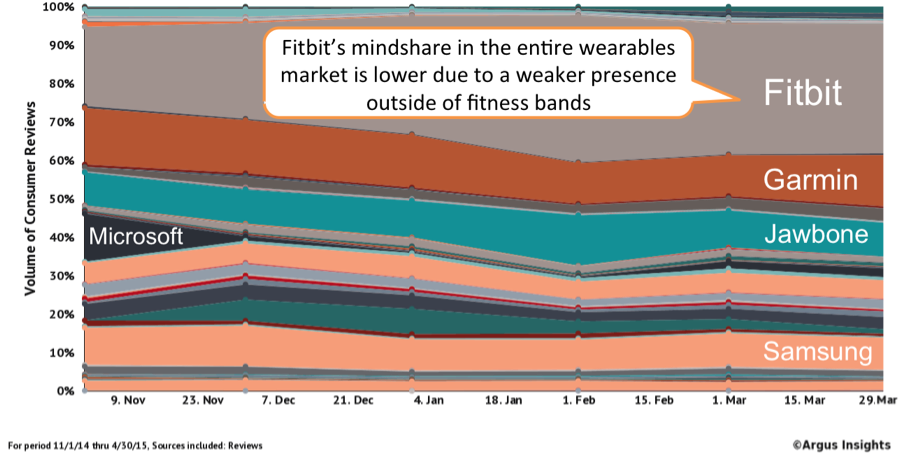 Argus Insights is a new type of market intelligence company founded by tech industry veterans seeking to connect the dots between technology innovation and consumer adoption. Argus Insights provides focused and actionable analysis on where consumers are taking the market, who is winning and why. Argus Insights is continuously monitoring millions of consumer reviews and comprehensive social conversations to derive feedback straight from the source. Our proprietary metrics of consumer mindshare and delight allow us to identify what attributes are important to the end user, rank product and brand performance, and accurately forecast adoption.

Argus Insights creates monthly mindshare analysis reports for paid subscribers within days of the month’s end so clients can act quickly, rather than wait for traditional reports which lag more than a month behind. For more information, visit https://argusinsights.com/.