Goliath vs. Goliath, Apple and Microsoft tag team on tablets and software this week

In a week where presidential candidates faced off on the policies that shape America’s interactions with the rest of the world, the whole world was focused on two different events, Apple’s subtle launch of the “condensed” iPad Mini and Microsoft’s much maligned release of Windows 8. Much the way pollsters pester us prolifically with prodding panderings of what they consider to be poignant questions (that alliteration is for you Ms. Norman, my junior English teacher), Argus Insights has been tracking how the market has responded to these two counterstrikes in the battle for the hearts, minds, and wallets of consumers the world over. In the graphs below you’ll find the standardized buzz levels and sentiment scores for the two brands as they duke it out, reported hour by hour starting at midnight GMT on 22 Oct 2012. 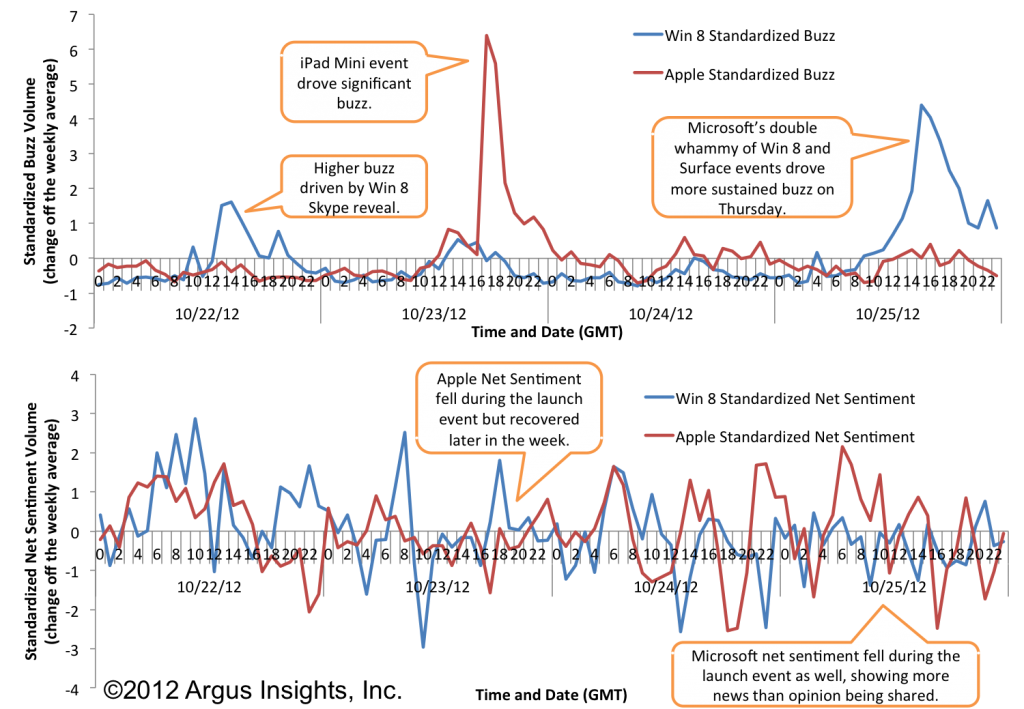 While Apple definitely receive higher overall levels of buzz than Windows 8, by standardizing the buzz and net sentiment we can see how much these launch events moved the needle for both brands.  A strange phenomenon of launch events is that the net sentiment actually dropped during the event for both companies, not driven by negative vibes being tweeted by consumers but the flood of more neutrally worded news items.  Consumers will start engaging more directly after the events when they can get their hands on these new devices and see if the magical condensation promised at the launches.

Watch early next week when we share the results of Google’s salvo into the fray on 28 Oct 2012 and we see how consumers react to both the new Apple and Windows products.

Is Apple starting to rot or just age gracefully? Sandy isn’t the only storm brewing, Surface and iPad Mini both try to make rain for their makers