Tim: I’m Sorry, China:You Should Be, Apple’s loss in mindshare makes China critical to their future

While much has been made of Apple’s apology to China for their dismal support of iPhone users, the bigger story is why the great Apple would apologize to any consumers after years of “if I want your opinion, I’ll give it to you” marketing.  Apple’s losing social capital in their current strongholds.  Our analysis of demand side metrics show not only that Samsung and RIM are beating Apple soundly in the battle for hearts and minds but that the rate of iPhone 5 adoption hiccuped after the Galaxy S IV launch. 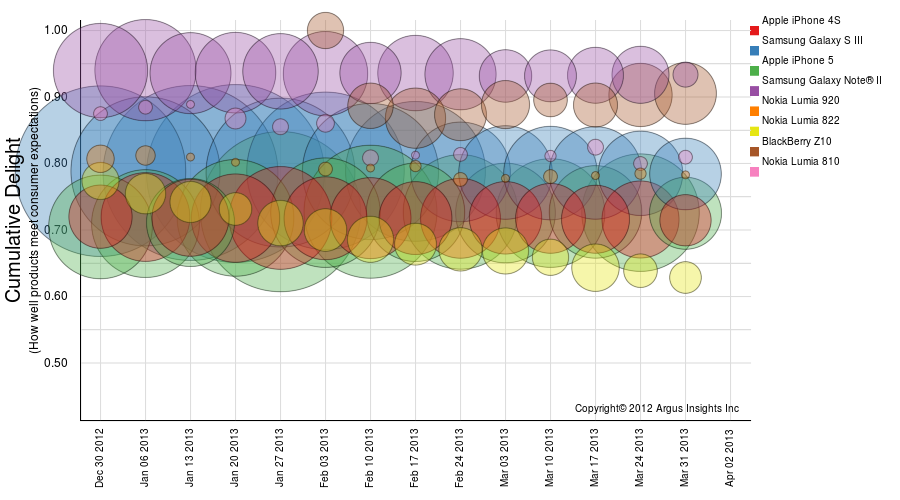 Our analysis shows Apple losing steam in the US, with the new Z10 from BlackBerry being perceived as a superior experience to the iPhone and evidence that both iPhone and Galaxy S III owners holding their breath for the upcoming Galaxy S IV launch in May.  We see evidence that existing iPhone customers are moving to the Z10 and considering the S IV to replace their aging iPhones, a move sure to bleed revenue and loyalty from Apple.

If you’d like to be part of the Smartphone forecast beta we’re launching at the beginning of May, reach out at sales@argusinsights.com and we’ll get you on the list for the weekly forecast.