Being Number One is Better Than Being First, Ask HTC

There’s been a lot of traffic about the HTC One, how HTC is ramping production.  Wired’s latest issue even includes a sidebar on this latest smackdown between Apple’s iPhone and “insert name possible contender into blank here” handset.  With all the focus on the Galaxy S4 “failure to launch” (think crashing rocket more than Terry Bradshaw’s derrier) it was easy to miss the triumphant return of HTC  to the market. 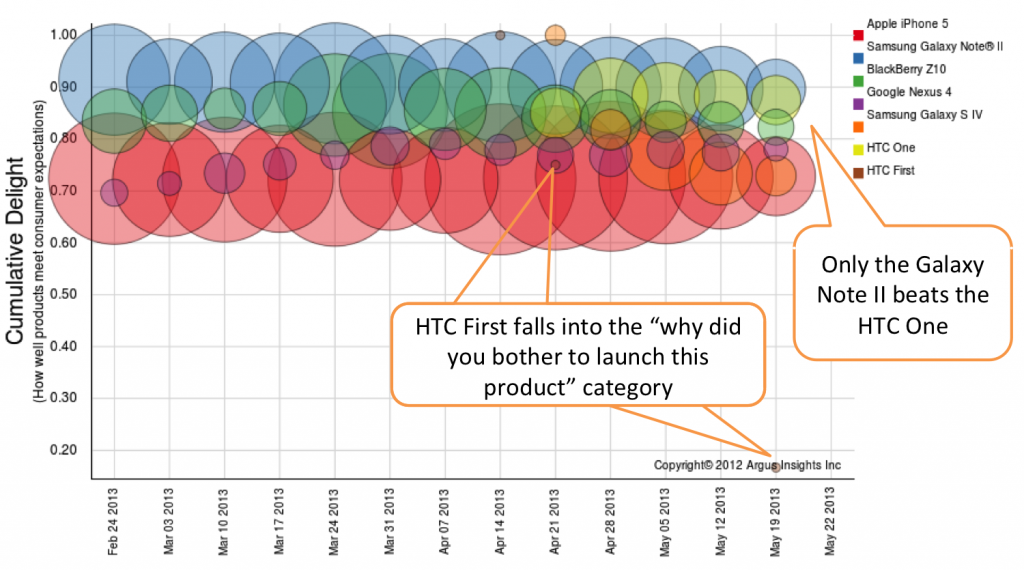 The HTC One is now the top rated smartphone launched in the past three months.  Only the aging Galaxy Note II is viewed as a more delightful experience.  Given the failure of the so-called Facebook phone to delight the market along with the fizzle of the Galaxy S4, brand is not enough for consumers, the product has to deliver on the promise of the brand story.  So the question is, will Apple’s next entrant into the smartphone battle for hearts and minds deliver a compelling new experience like the One or technical gimics that fade quickly like the Galaxy S4?

Sign up to be the first to know this an other shifts in the ecosystem from the mouths of consumers, not experts, when we launch the Argus Insights Smartphone Voice of the Market Demand Report…  And we promise to make the title shorter.

Spamalot, a social media drama in three acts Apple is a big fish in a shrinking pond