Lack of Experience Innovation Drives Apple to Compete By Lowering Prices, It Worked!

When the iPad Mini was launched in late 2012 it was into an already confused consumer market of the Apple faithful.  The iPhone 5 had been launched weeks earlier to a largely yawn response from the market (though it’s improving now).  The iPad 4 launched with the Mini, and out of the normal cycle consumers had come to expect from Apple, largely delivered what consumers expected from the iPad 3 in March of 2012.  Along with the release of the iPhone, Apple released new iPod Touch, known commonly the gateway drug to full iPhone ownership, but at a reasonably high price point.  This put Apple in a pricing squeeze play for the Mini, pricing it twice as much as it’s comparable competitors.  As a result we saw slow adoption for the iPad Mini and even the iPad 4 around the holiday season. 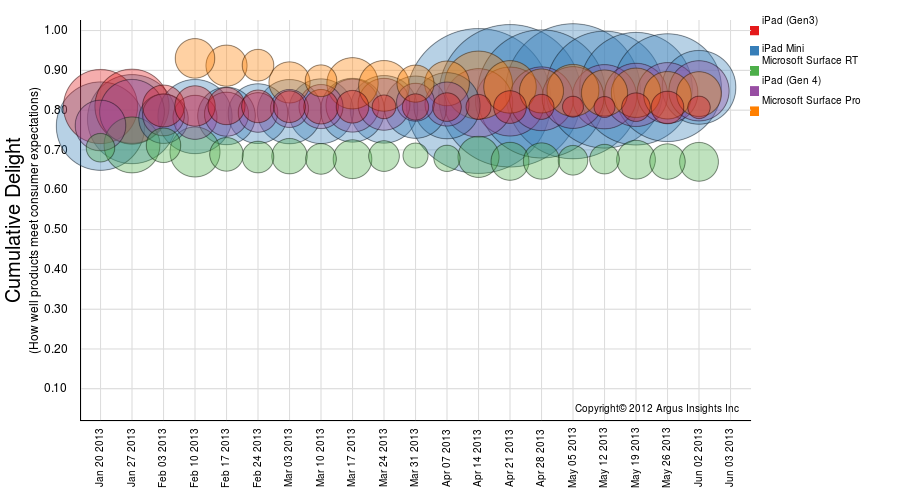 Cut to today and we see demand spiking in a way we have not seen for an Apple product since the iPhone became available on Verizon.  In wallowing through the social media analysis, we found the culprit.  Apple allowed retailers to drop the price by a significant percentage in April, ahead of Mother’s Day and after probably having a disappointing Valentine’s Day.  This is typically unheard of for Apple to allow a price drop before launching another product.  The punchline?  Apple is losing its ability to demand a premium from the market.  A smaller iPad is cool but not enough to compete against the much cheaper but almost equivalent experience of the Kindle Fire.  Apple will have to pull more than one rabbit from their hat at the event on 10 June.  Argus Insights is preparing a special surprise to assess the market impact of Apple’s announcements.  More soon!