The smartphone market seems to have paused in anticipation for Apple’s iPhone 6 launch. As has been the trend before with big Apple launches, consumers took a breath while awaiting what Apple had in store.

The chart below maps consumer mindshare across different major brands in the smartphone market. It is clear that mindshare overall dropped about a week before Apple’s new product launch on September 9th. While at first glance this trend could appear to indicate a lack of interest in smartphones, it actually demonstrates how consumers are willing to drop everything to wait for Apple’s new toys. While this is beneficial for Apple, it is not for Samsung who suffered a steep drop in mindshare, and  Motorola, and LG which remained mostly stagnant after Apple merely announced their announcement of new products. 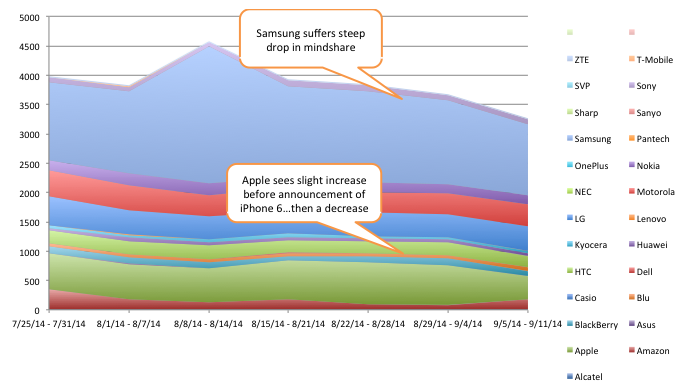 While other brands experienced a steady decline before Apple’s announcement, Apple saw a slight increase in the weeks leading up to it. This increase was caused by retailers lowering the price on old iPhone models to clear the shelves before news of the iPhone 6 broke. If the retailers did get people to upgrade to 5S iPhones with promotions just weeks ago, Apple will have a few disgruntled customers to deal with. Verizon and other retailers are already offering promotions to encourage people to upgrade to the iPhone 6, because that is crucial for the new Apple Pay system to thrive. With the sale of almost 4 million iPhone 6s in pre-sale, it appears as if Apple has once again shaken the market awake after sending it into anticipatory hibernation.

Argus Insightswill continue to investigate the effects of the iPhone 6 on the smartphone market, sign up today to receive reports on a regular basis.

Have Wearables Worn Out their Welcome? Apple Who? Amazon Jumps Back Into the Tablet Game After A Slow Summer