Samsung is fairing better in the smartphone market recently as several of their old smartphones are delighting customers more than the newest iPhones. It is no secret that Apple experienced its biggest launch yet with the iPhone 6 and iPhone 6 Plus in September. They reported themselves that they sold over 10 million new models in just three days.[1] However, consumer delight for the iPhone 6 and 6 Plus has quickly leveled out below delight levels of older Samsung phones. Samsung is winning the race for consumer attention and admiration in the smartphone market, as Apple’s iPhone 6 does not appear to be able to maintain its record-breaking burst out of the gate. 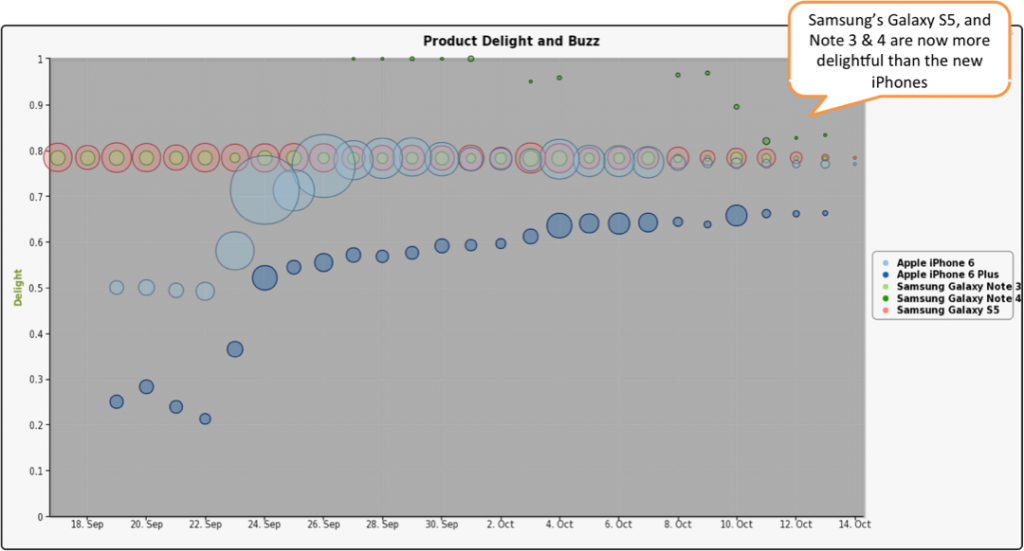 Despite Apple’s cool reputation and influx of early adopters, Samsung’s phones are pleasing more consumers in the long run. As the novelty of the iPhone 6 and 6 Plus launch wears off, Samsung consumers are continuing to positively endorse the Galaxy S5, Galaxy Note 4, and the nearly one year old Galaxy Note 3. This trend suggests that Samsung is winning the hearts of consumers despite their occasional love affairs with Apple.

Argus Insights will continue to track consumer perceptions of iPhones, Galaxy phones, and several other smartphones! For a more detailed look at the entire global smartphone market, order our Monthly Smartphone Report. For personalized analysis, portal access, or consultation about the smartphone, or any other market, please contact Argus Insights.