Best Buy’s Q3 earnings  were announced on Thursday, November 20th before the opening bell (much to the chagrin of the Argus Insights publishing schedule). Best Buy’s consumer review mindshare in Q3 of 2013 saw a sharp decline, while mindshare in Q3 of 2014 saw the opposite. After a slow summer, consumer review volumes shot up in August 2014 with continued growth throughout the entire quarter. Tablets, smartphones, and laptops received the most attention, but other sectors, like wearables, are beginning to contribute to the company’s increasing mindshare as well. Over the past year, Best Buy has been implementing ‘experience stores’ within their larger store, that are specifically focused on brands such as Apple, Samsung, and Intel. The targeted attention of these experience stores appears to be translating into increased consumer demand in Best Buy consumer electronics. Consumers were more interested in Best Buy products throughout the quarter, and this boost in attention will most likely translate to reported gains in Q3. 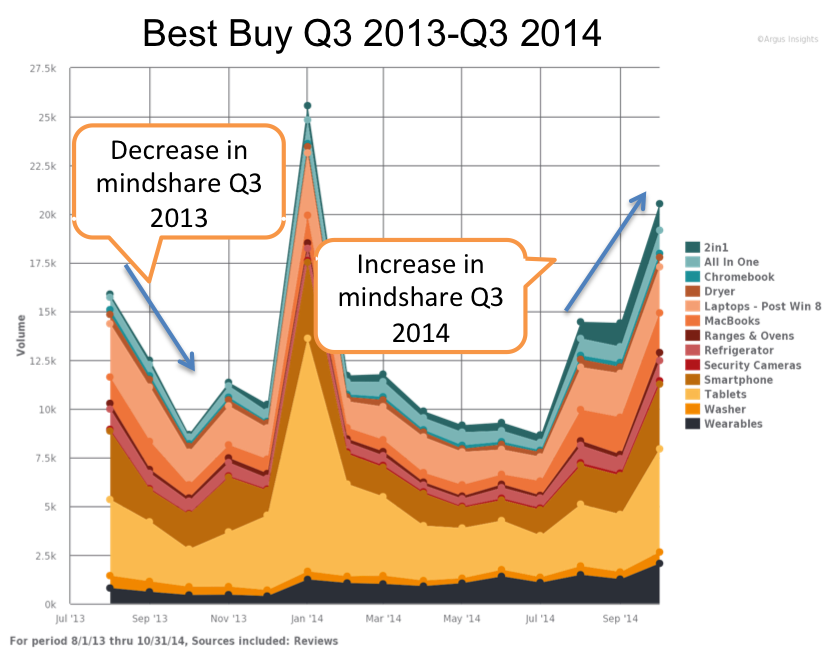 Comparing the trajectory of Best Buy’s consumer review volumes to that of Amazon further highlights Best Buy’s vast improvement in Q3 performance this year. Amazon saw higher volumes of reviews, but with a sustained trajectory. These shifts in relative review volumes are a key indicator of sales trends for retailers.  Amazon’s growth is in large part due to the release of new Amazon Fire Tablets (yes, they dropped the Kindle assuming we’ve already ignited our interest in their products and do not require kindling) though even without tablets, we see Amazon’s growth over the same time period in 2013. 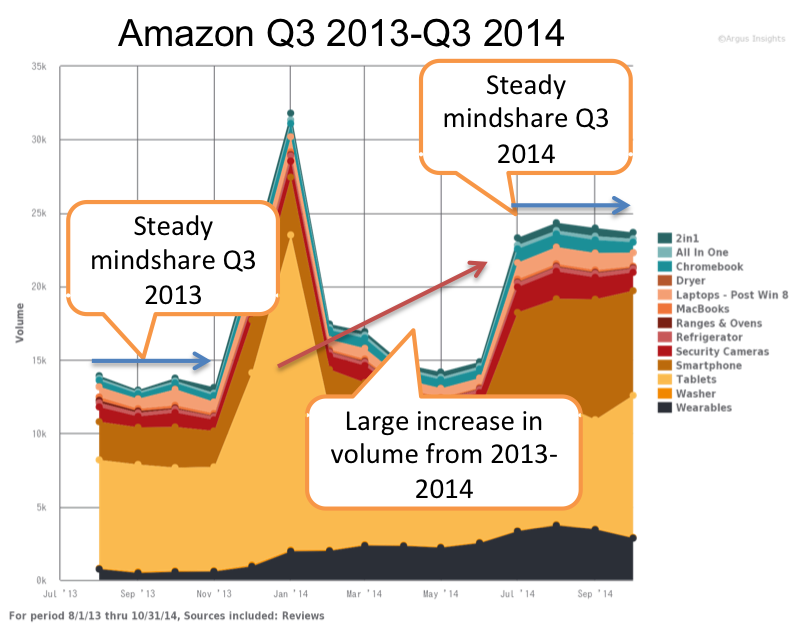 Best Buy saw a complete transformation in consumer engagement during Q3 of this year. This increased mindshare suggests that Best Buy will see sales growth for the quarter. (Editor note: Looks like we were right, they beat the street’s expectations).  Amazon still has overall higher growth year to year, but Best Buy has reversed the downward spiral of last year, fending off rumors of “death by showrooming.” We will keep watching through Black Friday’s frenzy and the rest of the holiday season and update the market just before their earnings releases in February.

Argus Insights tracks several product categories across various retailers. Please contact us for custom reports, access to our data, or personal consultation. If you are interested in a monthly report on the effects of consumer demand within the Wearables or Smartphone Market, check out our Monthly Market Analysis Reports.

For just a Wink of insights to remain informed between blogs and reports, sign up for our Free Weekly Newsletter.

Moto 360 is the Wearable Product to Watch: Learn More in Our Consumer Demand Report Fitbit Won Mindshare on Black Friday, But is That Enough To Brave the Upcoming Apple Watch Storm?

Ahead of the news from Facebook on Cambridge Analytica abusing the data of American citizens, Twitter started suspending accounts for a practice called Tweetdecking, where accounts would solicit and at times pay for accounts to artificially boost their classic influence metrics of reach and followers.  Over the weekend of 18 March, some of the Internet […]