Fitbit Q2 Revenue Surged, but Profits Fell: Will their investment in the future be worth it?

Since becoming a publicly traded company in June of this year, Fitbit has seen an increase in sales and revenue. However, after announcing their impressive earnings for Q2, their stock prices “plunged 14% in trading.” While Fitbit’s revenue beat forecasts, their profit slipped year to year due to increased spending on research and development. Spending money to make money, as Fitibt is doing by tripling their R&D spending, could have potentially spooked investors.

Stepping back to take a look at the entire wearables market, we see that Fitbit’s bid toward the future is probably a good idea. While Fitbit maintains the most mindshare in the wearables market, other fitness bands, smartwatches, and less common types of wearable technology are becoming more prevalent, and Fitbit must continue to innovate if they want to keep their users interested. Currently, wearables consumers are finding more delight with products from other brands, meaning there are better liked wearables brands out there just waiting for the consumer base to take notice. 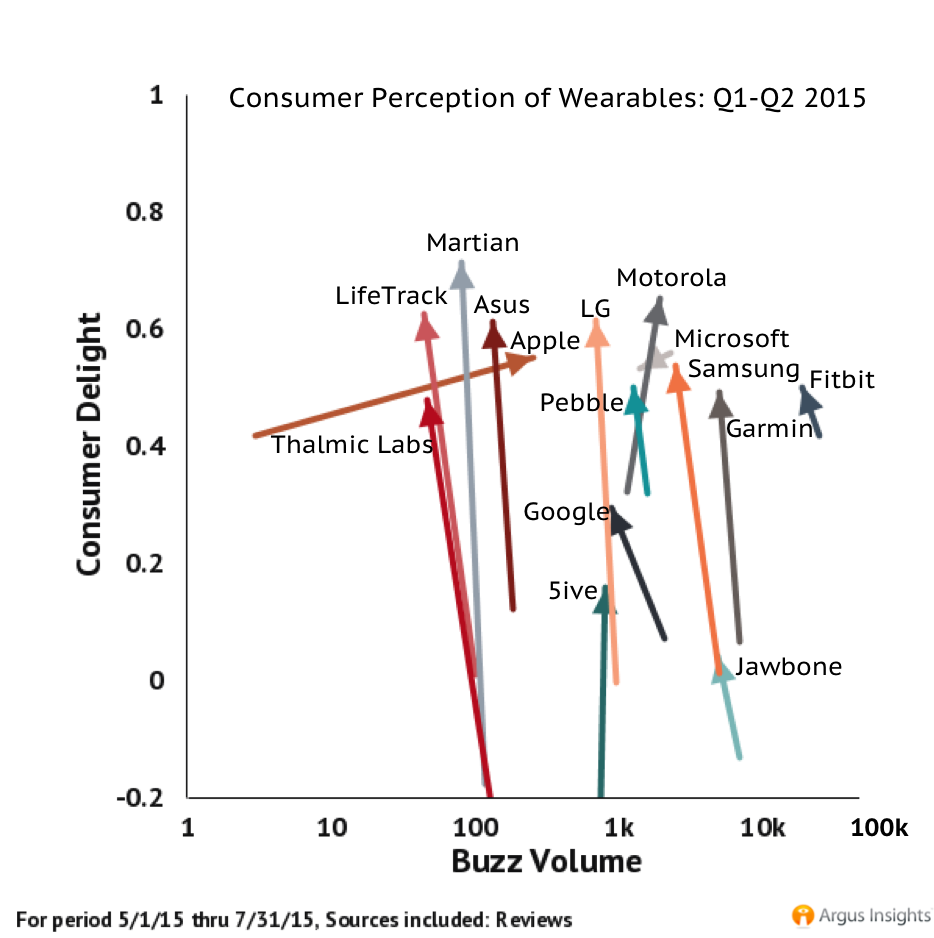 Fitbit continues to dominate the wearables market in terms of mindshare. They see far more feedback from consumers than any other brand, but Fibit consumers are far from the happiest. As demonstrated in the graph above, several brands saw a dramatic increase in consumer delight during Q2. Major established competitors Motorola, LG, and Samsung all saw an increase in positive feedback from consumers to surpass Fitbit in terms of delight, as did several less popular wearables manufacturers like Martian and Asus. In addition to competition from those increasingly delightful brands, as more consumer get their hands on the Apple Watch, a much anticipated smartwatch with fitness capabilities, they are reporting higher delight than Fitbit users.

Consumers know about Fitbit. They buy Fitbit devices and are satisfied, but recently, consumers are branching out to find delight in other brands. If Fitbit is to maintain their prowess, they must continue to innovate, and increasing their current spending on research and development could help them compete with the increasing delight of Motorola and LG.

Argus Insights is constantly tracking shifts in consumer perception in the wearables market, sign up for our free weekly newsletter for regular insights, or schedule a time to talk with us about the performance of your company compared to your competition.

Internet of Things Tops CES Chatter Ahead of 2018, Smart Home Beating Out Automotive

While most of us are winding down 2017, getting our last holiday purchases done and looking forward to a few days of family and fun, there is a group of folks that will not get a real break from work until January 14th, when the Consumer Electronics Show finishes and these stalwart people can finally […]

Could Robotic Vacuums Be Key to Smarter Homes?

In a recent fireside chat with TechCrunch, iRobot CEO, Colin Angle opined that one of the key issues in providing enough intelligence in the home is understanding the physical layout.  You cannot ask Alexa to get you a refreshing beverage (okay, a beer) from the fridge if Alexa or Amazon’s drone based beverage delivery service doesn’t […]