In the fall of 2015, just prior to the launch of the iPhone 6S and 6S plus, I wrote a post describing a hypothesis that this might be the last quarter of Apple driving significant growth in the smartphone market, as t he number of consumers without a smartphone shrinks at a faster rate than the number of consumers without an iPhone. Apple shocked the world when rumors were coming from across the ocean, he land where all things Apple are made, that they were being asked to scale back production by at least 30%. We were not shocked at Argus Insights. Not only have we been seeing the decline in Apple in the US for some time, we have also previously reported on the marginal demand increase of the 2015 iPhone launches.

Globally we are seeing a slowdown in iPhone demand.  Of the regions we track, only China saw growth in iPhone demand where the demand for older handsets, 6 and 6 plus, outstripped the demand for new handsets on by almost 80%. This suggests that Chinese consumers prefer the lower priced handsets of the prior generation over the new features available on the 6S and the 6S plus. 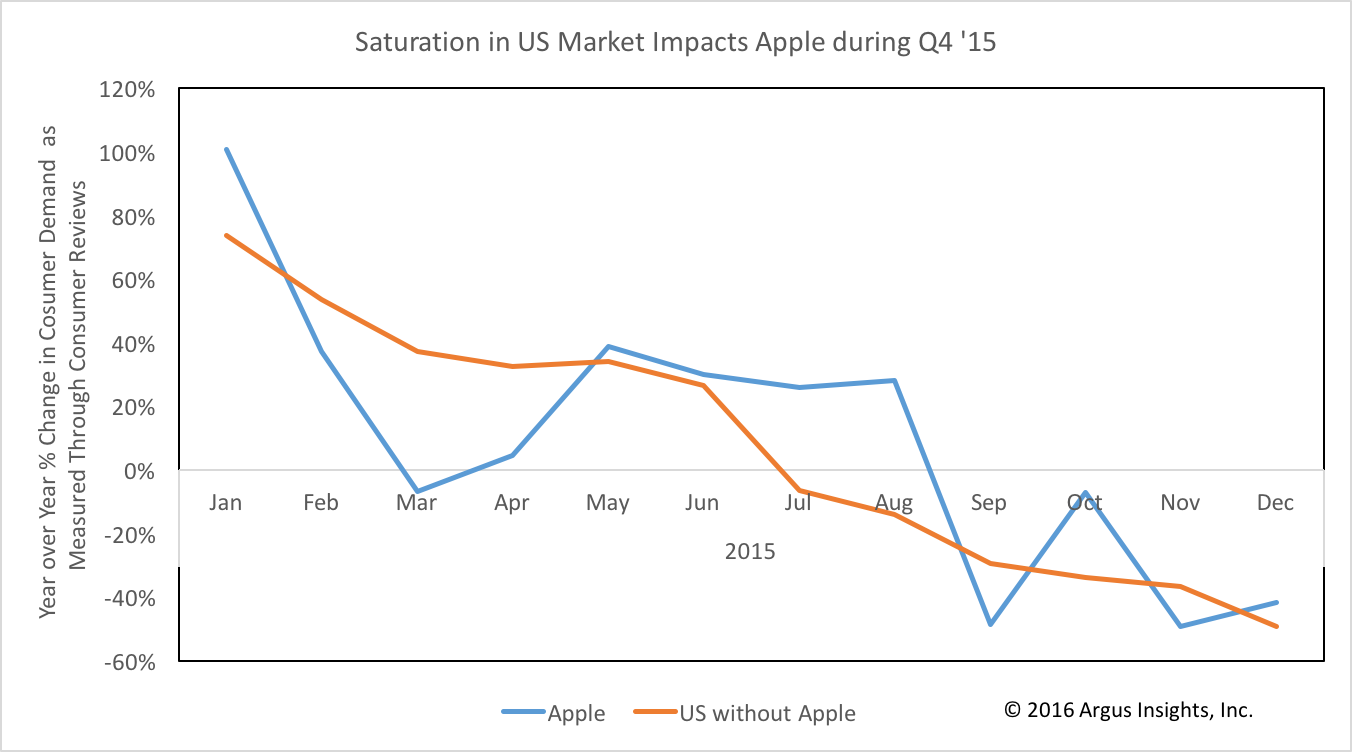 Demand fell the most in the US market. After the initial boost around the release date of the 6S and the 6S plus in late September, demand almost disappeared. Then the holiday promotions started rolling in, not only for iPhone but also Apple Watch and iPads. Discounts were applied on the actual price, not the typical retailer trick of offering a gift card, to comply with Apple’s “you can’t compete with the Apple Store pricing” mantra for retailers; meaning that Apple endorsed what started off as “door-busters” and evolved into recurring discounts similar to what Samsung has done in recent years to boost demand in the face of competition from Apple.

Major US carriers were hit especially hard, since fierce competition to grab consumers upgrading to the larger screen iPhone 6 and 6 plus in 2014 bucked many consumers out of their normal two-year upgrade cycles. Even Best Buy, the iconic outlet of tech you can still touch and buy, saw demand trend flat for iPhones in Q4. Part of this is due, as you can see in the graph above, to the fact that overall demand in the US market is falling year over year as consumers are keeping handsets longer. This trend is due to both lack of reason and lack of resources to upgrade. Apple has been riding the waves of adoption but is beginning to fall off. 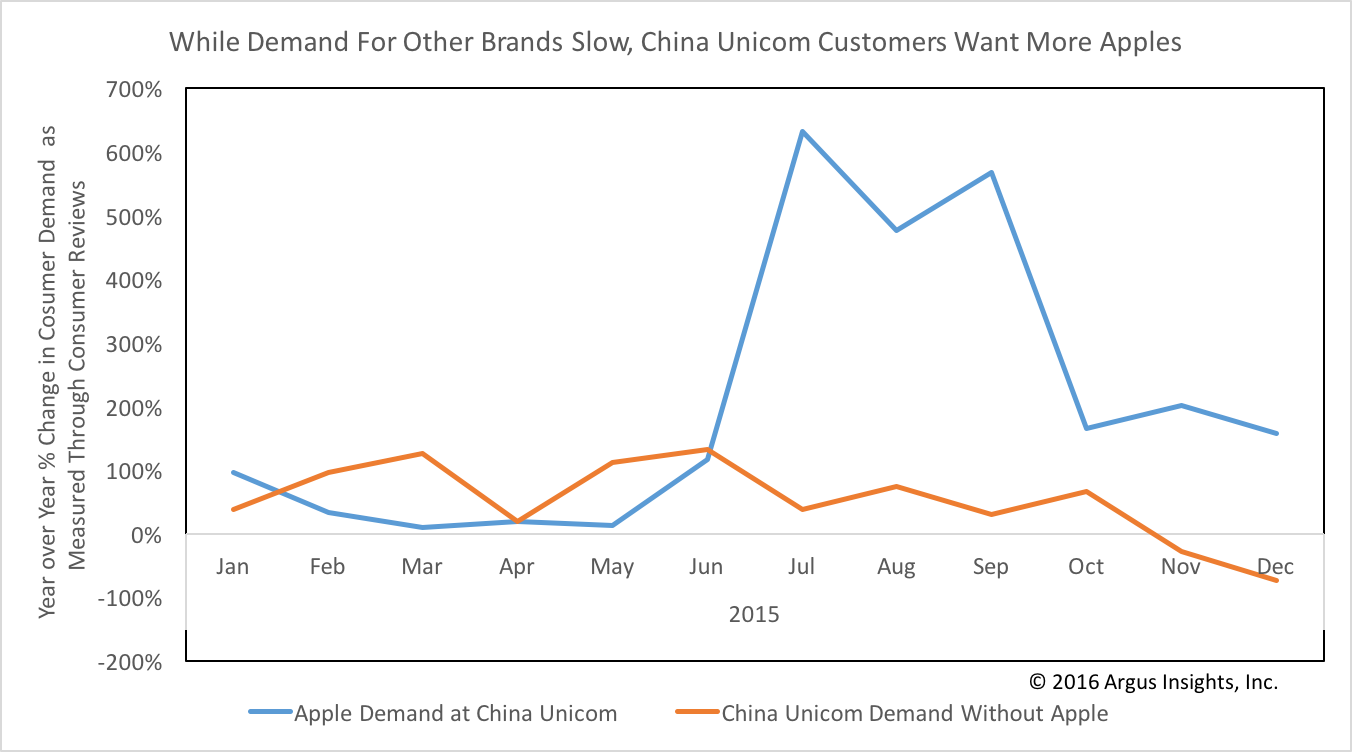 China is the one potential bright spot in Apple’s slowing plod toward global domination. Our data coming from China Unicom, a proxy for Chinese consumers, showed that Apple continued to show year over year demand increases, even as demand for other brands slackened. While the demand over the summer for large screen 6 and 6 plus handsets drove most of the Unicom demand, there is evidence that Chinese consumers retreated from the smaller screened 5S and 5C models given the assortment of attractive alternatives from Xiaomi and Huawei. In moving to mostly large screen devices, Apple has all but squeezed out Xiaomi from the minds of China Unicom consumers. As such, any weakness in demand in the US markets in Q4 will be offset by significant demand from China. Demand driven as much for the now cheaper 6 and 6 plus as for the new S model handsets. Given the poor response to the 5C in China, we have our doubts that a 6C will fare any better with consumers in China and India.

Smartphone demand is slowing in all markets at a huge cost to Apple’s sustained growth in actual handset sales. Though global smartphone demand is slackening, the number of iPhone users grows continuets to grow, albeit rather slowly. The revenue from each existing Apple user will sustain the company’s operations for years to come.

Interested in even more data? Check out all the insights we have to offer about the Smart Home, Wearables, Smartphone, and several other markets. To chat with us personally about consumer perception in your market, schedule a free market fit assessment.